James J. Smith begins his term as the League's Executive Secretary (this title was changed to Executive Director in 1949). He remained in this position until 1954.

In the midst of World War II, the following notice appeared in the January issue of New Jersey Municipalities, effecting the size of the magazine due to the wartime effort: "The War Production Board has directed all magazines to cut consumption of paper for 1943 to at least ten per cent below the quantity used in the previous year. Cooperating with this order New Jersey Municipalities has fewer pages this month."

In 1944, the League contributed to the creation of an actuarially sound Police and Firemen's Retirement System. 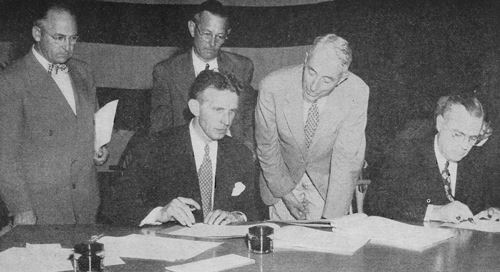 During the summer of 1947, municipalities had much at stake during the revision of New Jersey's Constitution. A League Constitutional Committee was appointed to work with the State Constitutional Convention to protect municipal rights under the new document. Three major issues held the League's primary interest: 1.) the drafting of a proper tax clause; 2.) the recognition of home rule; and 3.) opposition to a proposed constitutional proposition to dedicate highway funds. League efforts were successful on all three counts. The Constitution's new tax clause was in line with municipal thinking, considerably strengthened home rule powers and the move to dedicate highway funds was defeated.

Another important League legislative accomplishment was the passage of the In Rem Tax Foreclosure Act, which has saved millions of dollars for communities in foreclosing municipal tax liens.

Additional committees have been created over the years to assist in formulating League policy on general or special matters. These have included the Advisory Committee, Legislative Committee, several Conference Committees and numerous others appointed on an ad hoc basis.

Also rendering invaluable services have been the respective associations of functional and professional municipal officials which are affiliated with the League. Presently numbering 21, these groups are represented on many League committees and their special orientations provide depth and diversity to deliberations on League policy. 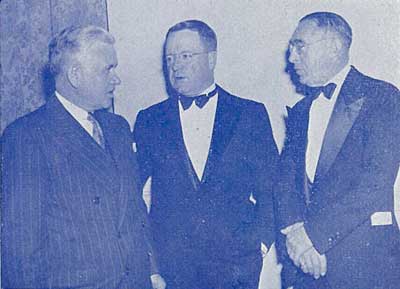