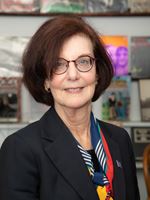 Gayle Brill Mittler is the Mayor of Highland Park.

Gayle Brill Mittler has served as the Mayor of the Borough of Highland Park, NJ since 2014. Prior to that time, she served as a member of the Borough Council for five years, including a term as Council President (2012-2013). Under Mayor Brill Mittler’s leadership, Highland Park has undertaken many thoughtful and far-reaching steps that build on the Borough’s sustainability–in the environment, in community building, and in economic development.

Highland Park has become a statewide leader in environmental stewardship. In 2019 the Borough passed a Bring Your Own Bag ordinance, becoming the first municipality in Middlesex County to ban disposable plastic bags and paper bags in local stores. In 2020 the Borough repurposed a tract of underutilized land for a PSE&G solar field, benefiting nearby apartment renters, creating new income for the town and regular energy resources for the NJ energy grid. The Borough has received Silver Sustainability Status every year from Sustainable New Jersey since 2017.

Highland Park is a model for community building and cohesion. The Mayor’s Area Faith Leaders Council brings together clergy members from different faiths to discuss shared concerns. The Mayor’s Equity Advisory Council meets monthly and offers input on a range of concerns related to bias, equity, inclusion, and perceptions of policing public safety. The Borough’s active Human Relations Commission regularly holds events that bring together residents to learn about and celebrate diversity. In 2020 Highland Park became the first Middlesex County municipality to be selected to join the AARP Network of Age-Friendly States and Communities.

Mayor Brill Mittler has positioned Highland Park strategically, to further redevelopment and to build on the vibrancy of its downtown. Her administration has stabilized real estate taxes, by creating shared services agreements with nearby towns, the County, the local school district, and PSE&G. Working through a series of public meetings over two years, the Mayor and Council developed and passed an innovative redevelopment plan in fall 2021 that encompasses four tracts within three blocks of the downtown and offers a broad vision for their use. Highland Park also received a multi-year NJ State Neighborhood Preservation Program (NPP) grant to improve life along the Borough’s Woodbridge Ave. commercial district.

Highland Park was also awarded the New Jersey League of Municipalities’ Innovation in Governance Award three times for its “Park Partners Community Grant Program” (2014); “HP Gives a Hoot” (2016); and “Civics for the Community" (2018).