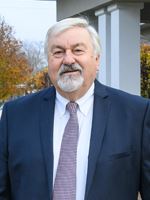 Mayor William Pikolycky was first elected Mayor of Woodbine in 1990.

Mayor Pikolycky has been a member of the New Jersey Water Association since 1991. He has also been involved with the MidAtlantic Pilots Association and the AOPA. He is a member of the New Jersey Farm Bureau. He served as President of the New Jersey Conference of Mayors in 2005, and now serves as a Director. He is also Past President of the Cape May County League of Municipalities. He served on the Board of Directors for the Sam Azeez Museum of Woodbine Heritage and is now on the Advisory Board of the Anne Azeez Instructional Site of Stockton University, which is also located in Woodbine. Mayor Pikolycky is on the Board of Trustees of the Woodbine Developmental Center.

Mayor Pikolycky has been inducted by the New Jersey State League of Municipalities into the Elected Officials Hall of Fame and the Mayors Hall of Fame for his 20-plus years in elected office. The honor is reserved for local municipal governing body members and mayors who have served for a minimum of 20 years in an elected municipal office